Citizens, local merchants, and especially youth are willing to give of their time to help others enjoy the covered bridge by volunteering at festivals, and other rewarding events that the organization brings folks together to enjoy. One of the Association’s main goals is to preserve the historic covered bridge. Equally important is their desire to preserve as much history as possible pertaining to the historic landmark. 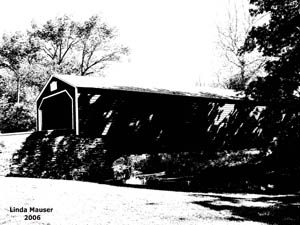 The Historic Kreidersville Covered Bridge was built in 1839.

In 1959, inspired citizens of Northampton County rallied for its preservation after it became known that the State Highway Department had plans to build a new concrete bridge in its place. Kreidersville Covered Bridge became one of the first covered bridges to be recognized for preservation by a committee of enthusiasts. That same year, they formed a State organization called “The Theodore Burr Covered Bridge Society of Pennsylvania.” The society was named for the arched truss patented by Theodore Burr and used in the construction of the bridge.

In 1960, The Burr Covered Bridge Society, together with The Harmony Grange and local citizens, influenced the Northampton County Commissioners to accept ownership after the Pennsylvania State Highway Department restored the bridge. Kreidersville Covered Bridge crosses the Hokendauqua Creek. Its length is 116 feet. On September 30, 1961, State, County and local representatives took part in the re-dedication of the bridge, then known as Solt’s Bridge. Kreidersville bridge in olden days was known in the community as “Hummel’s-Koch’s-Solt’s Bridge.” They were names of families who lived near the bridge in years gone by. 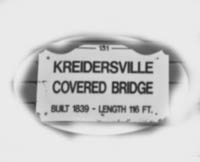 Did you know that Pennsylvania has 250 of the remaining 1500 covered bridges in the United States? From the moment you enter the cobblestone drive at the entrance of the historic Kreidersville Covered Bridge you can feel the peace and tranquility of this country place. Nearby is the Covered Bridge gazebo built by Wasyl Mauser, his son and other Members of his Scout troop 40 assisted.It is nestled near the trees and gently flowing Hokendauqua Creek.

Did you know that Pennsylvania is the Covered Bridge Capital of the world?

Allen Township became the proud owner of this bridge on December 23, 1997. It is the only covered bridge of three in the immediate area to survive and the only one left in Northampton County. Today it proudly bears the name Kreidersville Covered Bridge.

Kreidersville Covered Bridge is 116 feet long and of one span, and is of the Burr construction with a curved truss support. It was originally called Hummel’s Bridge and then Solt’s Bridge.

Burr Truss coupled with a multiple king post design provides the support structure for all seven of Lehigh Valley’s covered bridges. The arch of the Burr Truss provided a stronger support than the king post truss and therefore allowed a longer span to be built. Theodore Burr from Connecticut patented the Burr truss design in 1804. He was not related to Aaron Burr. 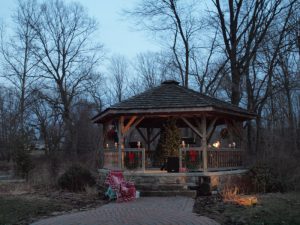 Donations of Time, Labor, and Property

Allen Township became the proud owner of this bridge on December 23,1997. It is the only covered bridge of three in the immediate area to survive and the only one left in Northampton County. Today it proudly bears the name "Kreidersville Covered Bridge."